What do the rolling fields of Gettysburg and the treacherous Florida reefs have in common? They were both conquered by the same man – George Gordon Meade. Though Meade is best remembered for his stalwart command of the Union forces at Gettysburg during the Civil War, history has overlooked his greatest achievements in the science of marine engineering. More than a century after his death, the revolutionary screwpile lighthouses he built on the Florida Reef still stand grand. Their massive piles and blinding beams suggest the strength and vision of their designer, for Meade’s ability to second-guess his adversaries was unparalleled, whether on the fatal soil of Pennsylvania or the storm-tossed shoals of South Florida.

A dauntless leader who quietly carried on his duties with steel-nerved efficiency, Meade was labeled “a damned, goggle-eyed snapping turtle” by his Union men. He was often criticized by his peers, perhaps because he had little appetite for the business of soldiering. But there was one point on which all agreed, even President Lincoln, George Gordon Meade was not afraid to tackle any assignment.

Only days before the famous Battle of Gettysburg in July 1863, Meade was called upon to replace his superior, Major General Joe Hooker, as commander of the Army of the Potomac. Meade accepted this awesome responsibility, reluctant only in his concern for Hooker as a friend and compatriot. Hooker, Meade knew, folded up too easily under pressure.

With his unchanging, somber expression and cool head, Meade anticipated Robert E. Lee’s moves, made critical tactical decisions and defeated the Confederate forces at Gettysburg. His Union victory was celebrated as the turning point of the war and took many of his critics by surprise, though it shouldn’t have. Meade possessed an uncanny ability to logically assess challenging situations and make sound decisions.

He had proven it time and again in diverse settings far from Gettysburg. The most obvious evidence of his skill and fortitude stood on the Florida Reef, that graveyard of ships stretching south from Miami to the confluence of the Atlantic and the Gulf of Mexico. Meade had won battles along this tempest torn strand at such places as Carysfort Reef, Rebecca Shoal, and Sand Key. These briny battlefields made the enemy at Cemetery hill seem an easy opponent.

Decades before Gettysburg, Meade could not have imagined that his composure and constancy would someday be employed in warfare. He had neither desired a military career nor aspired to greatness on the battlefield. In fact, his appointment to West Point in 1830 had come about more by fate than by design.

The son of a wealthy U.S. naval agent, Meade was born in Cadiz, Spain in 1815. His future aspirations as a student of engineering seemed secure until his father loaned the government large sums of money. The debts were never repaid, and a disappointed and penniless Meade applied to West Point. He graduated 19th in the class of 1835, but the hallowed halls of the military academy had failed to inspire him.

As a brevet 2nd lieutenant, Meade was sent to Florida to help quell the Seminole outbreak. While there he contracted yellow fever and spent most of the assignment recuperating. A year later, he resigned from the Army intent upon making his fortune as a survey engineer. He did a number of railroad surveys and established the boundary between the United States and Texas before 1840 – the year he married Margaretta Sergeant.

Survey engineering did not bring Meade the financial security he needed to support a wife and family. Perhaps with slight regret, he reenlisted in the Army and was assigned to the Army Corps of Topographical Engineers. Meade’s first task was the design and construction of lighthouses in and around the Delaware Bay. Under the aegis of Major Hartman Bache, a gifted marine architect and engineer, Meade developed an intense and enduring interest in pharology.

Marine engineering was a rapidly expanding field in 1850, but most of its genius had evolved in Britain where men like the Stevensons, Scotland’s family of renowned bridge and lighthouse builders, and England’s John Smeaton, who successfully built the lighthouse on the Eddystone Rocks, dominated the realm of offshore construction. Meade and Bache were well aware of the United States’ inferior navigational aids, and with staunch optimism, they set out to improve them.

The Delaware Bay, though somewhat protected from the harsh conditions of the open sea, was a difficult site for a lighthouse. Its estuarine, alluvial bed was very unstable and would not support the foundation of a conversational lighthouse. Meade and Bache opted for a revolutionary design of that had been successfully built and tested at Maplin Sands, England twelve years before by marine architect Alexander Mitchell. 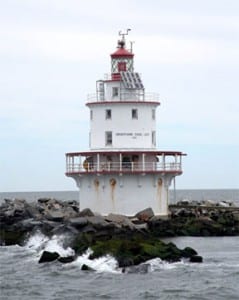 Called a screwpile lighthouse, the new Brandywine Shoal was a lantern and keeper’s house atop a central stabilizing stair cylinder, surrounded by eight pile legs. Each pile was lightered out to the site by a supply ship, then transferred to a drilling raft where it was sunk through a central hole in the raft until it touched the seabed. It was then turned by a windlass until its flanged feet were screwed to the prescribed depth. The sunken piles were braced together with crossbeams. When completed, the Brandywine Shoal Lighthouse resembled a 46 foot, giant tarantula standing knee-deep in the mucky Delaware Bay. It was no beauty by accepted standards, but it was firmly anchored into the bay floor at a price the government could afford.

During this time, Meade was also involved in surveying and charting the Florida Reef – a task that prepared him for his next assignment with the Army Corps of Topographical Engineers. Construction of a screwpile lighthouse had been started on Florida’s perilous Carysfort Reef. Its chief engineer died before the work could be completed, and Meade, who had aptly demonstrated his expertise at Brandywine Shoal, was sent to finish the job. 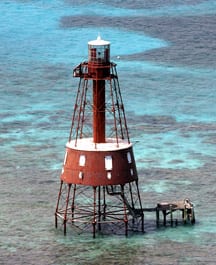 Carysfort Lighthouse had been designed by Isiah P. Lewis, a lighthouse inspector and engineer with progressive ideas for this his time. Lewis’ screwpile design provided for prefabricated, interchangeable parts that could be transported easily and quickly assembled. The entire structure was preassembled at a foundry in Philadelphia as a dress rehearsal to train workers for the actual on-site event. It was then disassembled and shipped to Florida.

When assembly began out on the reef, workers encountered and unexpected and serious problem. The coral reef was thought to be solid, but initial drilling proved it to be a sandbank enclosed by a hard coral crust. It was necessary to design large stabilizing disks for each pile where it entered the coral. The lighthouse was termed a diskpile structure, rather than screwpile.

By now Meade had gained enormous knowledge from three master engineers – Bache, Mitchell, and Lewis – but the U.S. Lighthouse Establishment was undergoing scandalous upheaval, and funds to complete the Carysfort Lighthouse were temporarily withheld. Meade tactfully pressured Congress, emphasizing the need to complete the lighthouse on schedule. Though, appropriations came later than planned, he was able to finish the work on time and light the tower on March 10, 1852.

Two months later Meade was transferred to Sand Key where Florida’s second pile design lighthouse was already in progress. This Jekyll and Hyde site had totally disappeared in an 1836 hurricane, destroying a masonry lighthouse that stood watch on it and killing the keeper, Rebecca Flaherty, and her five children. 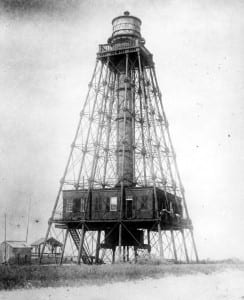 Meade relished the challenge of the mercurial key and carefully studied the proposed design. A pyramid framework of 17 heavily braced piles surrounded a keepers’ house and central stair cylinder. The tower was prefabricated and ready to assemble, but funding again held up construction. Frustrated, Meade waited nearly a year before his crew could resume work.

During this time he devoted his idle hours to design of a new, five-wick, hydraulic lamp to replace the complicated French lamp then in use at many American lighthouses. When Sand Key was near completion, Meade requested his lamp be installed there: “It is, in fact, a carcel lamp,” he reported to the Lighthouse Board, “except that instead of pumping up the oil by clockwork, it is raised to the level of the burner by being discharged from a reservoir in the dome of the lantern…. Its simplicity and uniform working afforded great relief to the keepers.”

Meade’s design was approved and worked so successfully at Sand Key it was adopted for general use in American lighthouses.

During his supervision of the Sand Key Light, Meade became very knowledgeable about the new prismatic lenses being purchased for American lighthouses. It was no surprise when the government asked him to demonstrate a Fresnel lens at the 1853 Crystal Palace Exposition in New York. Meade’s reply was characteristically frank: “I will cheerfully attend to this business with two provisions: first, that it is made a matter of duty, and second, that it is not to cost me anything.”

After returning to Florida, Meade oversaw the construction of Sombrero Key Lighthouse, a 147-foot iron giant that showcased his finest engineering talents. Again, Meade chose a diskpile design because of the reef’s compact outer shell. Always aware of the most modern methods available, he also utilized the recently discovered process of galvanizing iron to add strength and durability to the huge sentinel.

Like its predecessors, Sombrero Light was an open framework of crossbeams that allowed wind and waves to pass through it unobstructed. As this tallest of the reef lights was raised, a hurricane pummeled South Florida, and fickle Sand Key again disappeared. Its lighthouse was severely tested but remained anchored to the reef, proving Meade had chosen a strong design. 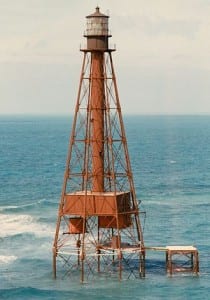 The last of Meade’s successful reef lighthouses was built at Rebecca Shoal in 1855. He had also overseen construction of several masonry towers along the Atlantic Seaboard, including the handsome brick sentinels at Barnegat and Cape May, New Jersey. 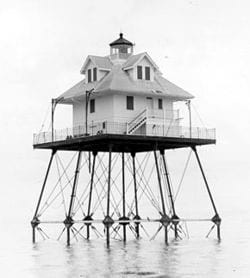 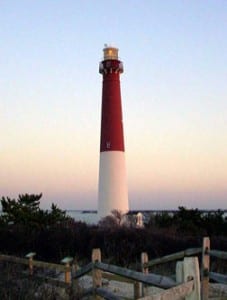 Now a captain, Meade so impressed the Lighthouse Board that he was appointed guardianship of the 4th and 7th Lighthouse Districts. He remained in Florida until 1860, then left to direct the Northern Lakes Survey.

Overwhelmed by a sense of duty, he requested active duty at the outbreak of the Civil War, was promoted to brigadier general, and eventually took command of the Army of the Potomac at Gettysburg. Following that fateful battle, Congress recognized Meade’s accomplishments “for the skill and heroic valor which … repelled, defeated, and drove back, broken and dispirited … the veteran army of the Rebellion.”

At the close of the war General Meade again turned his talents to building, but in a more tranquil setting than the stormy Florida Reef or the bloody fields of Gettysburg. He left a lasting monument to his creativity in the planning and construction of beautiful Fairmount Park in Philadelphia.

George Gordon Meade died November 6, 1872, so immortalized by his military genius that few Americans know of his great service to humanity in making the sea roads safe. Some say his true brilliance is preserved in the centurion sentinels still keeping watch in the Delaware Bay, New Jersey’s shipwreck coast and on the Florida Reef.

The Meade Society will celebrate its 25th Anniversary November 13th, 2021. Join us to see for a wonderful evening of food, beverage and its annual awards. [See link.]

Be sure to see Prof. Jennifer Murray's talk on Meade on C-SPAN! Use her FACEBOOK PAGE or link to her on C-SPAN. She is a leading proponent of the General's contributions to the Civil War and his country. See her program on Meade specifically!
----------------------
Due to the COVID-19 Pandemic of 2020, several of the Society's events have been cancelled. See UPCOMING EVENTS for information on events that are scheduled.
↑