The General Meade Society pays our tribute to a loyal supporter, Ted Alexander. The Society will miss his inspiring and educational battlefield knowledge and offers our condolences to his family; the Civil War community will feel his loss. The following is a notice from Chambersburg Civil War Seminars & Tours:

Our Tribute to Ted Alexander 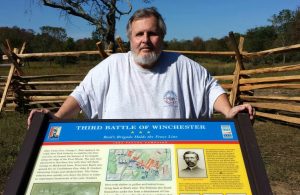 We are saddened to learn that our good friend, colleague, mentor and past program coordinator for Chambersburg Civil War Seminars & Tours, Ted Alexander, passed away last night. Ted had suffered a number of health issues over the years, but was a champion for Civil War history and preservation throughout his life. At the Chambersburg Chamber, we had the opportunity to work with Ted for more than 30 years. With his input and passion, the programs raised hundreds of thousands of dollars to preserve our nations’s sacred history. Our thoughts and prayers are with his family during this difficult time – he will be missed.

On behalf of Chambersburg Civil War Seminars and the Chambersburg Chamber, we will be sending a Memory Book to Ted’s family as a tribute to his legacy in the Civil War community. We invite you to please email us any contributions you would like included such as a nice message regarding a fond memory with him. Submissions may be sent to Lark at lkennedy@chambersburg.org.

Below is a special message we’d like to share from Eric Wittenberg, Ted’s recent successor to Chambersburg Civil War Seminars & Tours:

“In the spring of 1992, I had the great good fortune to meet Ted Alexander, the chief historian at Antietam National Battlefield. We quickly struck up a warm friendship that lasted for nearly 30 years. Ted had a heart as big as his body–if he liked you, he would do anything for you. That’s the thing that I always will remember about him. He became like a big brother to me.

Ted is who got me interested in the retreat from Gettysburg, which was long one of his specialties. We spent many an hour together exploring those roads and obscure battlefields. He was always El Jefe de Retreatistas, and when the time came for J David Petruzzi, Mike Nugent and me to put together our book on the retreat–especially the driving tours–Ted was the first person we called.

“Along the way, Ted invited me to present at one of the programs of the Chambersburg Civil War Seminars, and I soon became one of the regulars at those events. Attending year after year, I got to know many of the participants–they became friends.

“Unfortunately, Ted had to step down as program coordinator last year due to health problems, and having understudied him for some time, I became the logical successor. While I was–and am–honored to be the one to succeed Ted, it made me terribly sad to have to do so, because it meant the end of an era.

“A cascade of health issues forced Ted to have to move into an assisted living facility a number of months ago, and I hoped that he would be comfortable there. Due to COVID-19, I hadn’t been able to go visit him there.

“Yesterday, I learned that Ted was in the ICU in a hospital in Hagerstown, Maryland, and that the prognosis wasn’t good. And this morning, I awoke to the unhappy news that Ted has left us. I’m grateful that he didn’t suffer for long, but I will greatly miss my friend.

“Sleep well, my dear friend. You’ve earned it. You leave behind a giant pair of shoes that I can only hope to try to fill, and you will be badly missed.” – Eric Wittenberg

General Meade will visit the Baltimore Civil War Round Table to complete a program on his life and career. Tuesday, January 19, 2021 at 7:30pm.
He will speak on Meade AFTER Gettysburg
This presentation will be held, via ZOOM, on Tuesday, January 19, 2021, at 7:30 p.m. Dr. Andy Waskie will return to complete his presentation on Gen. George G. Meade.  To register for the meeting, use the link below. Please register early.

https://us02web.zoom.us/meeting/register/tZMsd-qvqzwuGN11ZVjCroAz-4n5WnZToUnN
After registering, you will receive a confirmation email containing information about joining the meeting. The MEADE SOCIETY mourns the loss of EUGENE G. STACKHOUSE, noted Philadelphia historian, author, and supporter of historical endeavors. [See his bio.]

Be sure to see Prof. Jennifer Murray's talk on Meade on C-SPAN! Use her FACEBOOK PAGE or link to her on C-SPAN. She is a leading proponent of the General's contributions to the Civil War and his country. See her program on Meade specifically!

Due to the COVID-19 Pandemic of 2020 several of the Society's events have been cancelled. See UPCOMING EVENTS for information on events that are scheduled.