On Saturday, October 2, 2021, led by society president Anthony Waskie, PhD (MC), several members of the General Meade Society of Philadelphia, and The Catto Society participated in the Memorial Honor Ceremony commemorating the 150th Anniversary of the Assassination of Major Octavius V. Catto, the ceremony was held at the Catto Monument at the South Front of City Hall, in Philadelphia, PA.

Among other remarks, the O.V. Catto Memorial Keynote Address was delivered by Brigadier General (Ret.) David Wood, of American Legion Post 405, of the Union League of Philadelphia.

Following the ceremonies at City Hall, at the Union League of Philadelphia, (Meade Room) the Pennsylvania National Guard Award Luncheon & Medal Ceremony was held, where the Armed Services Council of the Union League presented the Major O.V. Catto Awards to deserving PA Guardsmen. 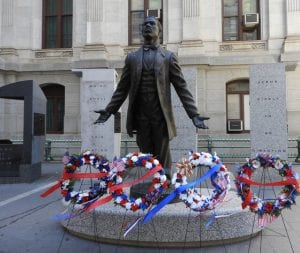 Following is the keynote speech at the ceremony given by Brigadier General (Ret.) David E. Wood:

“Thanks you all for the opportunity to represent the Pennsylvania National Guard, and all Veterans, as we celebrate one of our own… Major Octavius V. Catto.

This officer was a true hero in the fight for our nation during the Civil war, and the fight for equal rights in the years following.  As a member of the Pennsylvania Militia (today’s National Guard), Catto rose to the rank of Major, and was the Adjutant for the 50th Brigade, made up of volunteers formed to fight after the invasion of Pennsylvania by Confederate forces.

His leadership has a free Black man in the City of Philadelphia was instrumental in recruiting and forming of eleven Colored Infantry Regiments of over 1000 men each.  These Troops as represented by our reenactors here today, were the pride of the African-American Community, and represent the long tradition of service to country, despite unequal laws and racial divide… that left these citizen-soldiers to persevere in the most difficult of conditions.

After the War, Catto remained a leader in Philadelphia, as a Professor at the Institute for Colored Youth (now Cheney University)… a founding member of Philadelphia’s Negro League baseball….and an active drilling Guardsmen in the Pennsylvania Militia.  In 1871, he was called to duty to help protect Black voters during the City’s mayoral elections.  As he approached his home to put on his uniform, he was shot to death by racist thugs.

Today, the Commonwealth of Pennsylvania, the City of Philadelphia, and all those gathered here today, celebrate the memory of Major Catto and the virtues he stood for.  His sacrifice almost 150 years ago….cannot be forgotten…even now as our Nation struggles over the right to vote,  the way to vote, and the protection of our votes.  His statute here, in the city that is considered the cradle of our Democracy… shall continuously remind us… that freedom must be always be guarded.  The Rights of Americans of every creed, color, religion and gender cannot be taken for granted.  This Memorial that stands before us…now more tha ever…rededicates us all to the cause of freedom and equal rights… that must be protected as the bedrock of our Nation.  Thanks to patriots like Major Catto, we have the inspiration and example to continue to stand up for the dignity of Americans across this land and ensure our Nation’s future for many generations to come.  Thanks you all for being here, and for being proud Americans…and never forget to cherish the importance of your right to vote!”