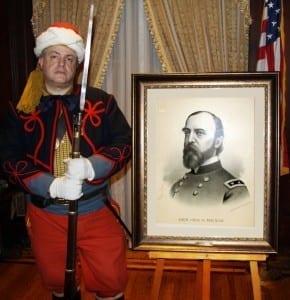 General Meade was a native of Pennsylvania, growing up and receiving his early education in Philadelphia. He was appointed to West Point. After his graduation in 1835, Meade pursued a career as a military engineer. He became famous as the builder of Lighthouses, many of which still stand on the New Jersey and Florida coasts. He was also engaged in survey work; and served as superintendent of the Survey of the Great Lakes. He was a career officer in the Army, and a veteran of the Mexican War, where he received awards for his bravery in battle, serving on the staff of Gen. Zachary Taylor.

Upon the outbreak of the Civil War, he received command of a Brigade of Pennsylvania troops and a promotion to General. He served with distinction in all the battles of the vaunted “Army of the Potomac” in the East, receiving a near mortal wound at Glendale.

On the eve of the most critical event in the nation’s history, Meade was ordered to assume command of the Army and move against the Confederates, who had invaded Pennsylvania. By all accounts, the approaching Battle of Gettysburg would decide the fate of the nation. Gen. Meade fought a flawless fight and defeated the insurgent enemy, forcing his retreat. For his victory at Gettysburg, Meade received the thanks of Congress and a grateful nation, as well as a Congressional Gold Medal.

Meade remained in command of the Army of the Potomac to the end of the war, overseeing its operations until victory. After the war, he returned to Philadelphia and his native state as Military commander taking up residence in Philadelphia while engaged in many civic activities, including founding Fairmount Park, the Lincoln Institution for the orphans of veterans, and supporting many cultural institutions.

General Meade died from the complications of his battle wound, while still on active duty in the army, mourned by the entire nation. He was buried with great pomp and ceremony in Historic Laurel Hill Cemetery in his hometown of Philadelphia.

His was a life of stellar service without complaint, and a lasting legacy of genius devoted to his state and nation.

Using Meade’s own words and extensive background research, Dr. Andy Waskie (PhD), historian and president of the General Meade Society will bring General Meade ‘back to life’ to speak of his career and services to the nation. By telling his story through a ‘first-person’ (‘you are there’) presentation, the audience sees and hears General Meade, can ask him questions, and interact with this famous Pennsylvanian of the Civil War.