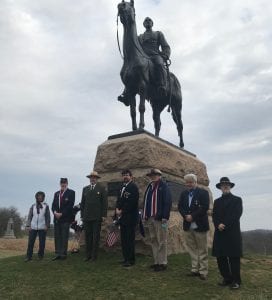 General George G. Meade, the victorious Commander of the Union Army of the Potomac at Gettysburg and Savior of the Union will appear on Pennsylvania Cable Network along with Pennsylvania born General John Gibbon on Thursday, July 1, 2021 at 7:00pm to discuss their roles in the Battle of Gettysburg.

Other PCN programs on Gettysburg

The General Meade Society’s mission is to promote and preserve the memory of Union Major General George Gordon Meade, commander of the Army of the Potomac and architect of the Union victory at Gettysburg. The society currently boasts hundreds of members throughout the country, all of whom share a common interest in General Meade’s multifaceted life and career.

Learn more about our organization by visiting: http://www.generalmeadesociety.org

Civil war historians and enthusiasts meet on America’s most famous battlefield every year to walk in the footsteps of the soldiers who fought there in July of 1863. The Battle of Gettysburg, the bloodiest fight to ever take place on American soil, is explained to visitors and PCN viewers by Gettysburg National Military Park Rangers (GNMP) and licensed battlefield guides from the National Park Service like Rangers Troy Harman and Matt Atkinson. This year’s coverage also includes a LIVE Call-In Program with guests from the Confederation of Union Generals (COUG) portraying historical figures of the time, discussions and roundtables from the Civil War Institute, and interviews with various Gettysburg experts. Watch our Gettysburg anniversary programming from July 1-4. For program times, please visit PCNTV.com/gettysburg. Thursday, July 1 – 7 PM • LIVE Call-In Program: Battle of Gettysburg with guests from COUG • Cemetery Ridge with Ranger Dan Welch • Battle of Gettysburg Day 1 with Ranger John Nicolas Friday, July 2 – 7 PM • The Wheatfield with Ranger Rob Finkill • Battle of Gettysburg Day 2 with Ranger John Hoptak • Care of the Wounded with Ranger Troy Harman Saturday, July 3 – 7 PM • Battle of Gettysburg Day 3 with Ranger Troy Harman • Pickett’s Charge with Ranger Matt Atkinson Sunday, July 4 – Marathon • Historical Figure Portrayals and Interviews with COUG ABOUT PCN: PCN is a 501(c)(3) nonprofit television network dedicated to educate, connect, and celebrate Pennsylvania’s past, present, and future through cable television and streaming platforms. To make a tax-deductible donation to support PCN’s mission or to get the PCN Select App, visit pcntv.com.

HOW TO WATCH: Have cable? You have PCN. No cable? Stream with PCN Select on your favorite device. Learn more at pcntv.com/how-to-watch

Join the General Meade Society as its members and many others celebrate  the birthday of General George Gordon Meade, the victor of the Battle of Gettysburg at Laurel Hill Cemetery on December 31st at noon! All are welcome! [See program at this link.]

Be sure to see Prof. Jennifer Murray's talk on Meade on C-SPAN! Use her FACEBOOK PAGE or link to her on C-SPAN. She is a leading proponent of the General's contributions to the Civil War and his country. See her program on Meade specifically!
----------------------
Due to the COVID-19 Pandemic of 2020-21, several of the Society's events were cancelled. See UPCOMING EVENTS for information on events that are scheduled.
↑