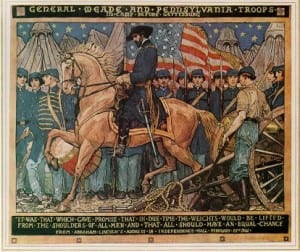 There were 27 of us on board as we departed Laurel Hill Cemetery in a bright yellow school bus, Hagey Coach & Tours driver Dave Leslie at the wheel and Andy Waskie on the mic, shortly after 9 a.m. on Saturday, May 6.  The focus of our tour this day would be Philadelphia sites honoring veterans, including but not limited to those of the American Civil War.  Given that the Grand Army of the Republic (G.A.R.) was founded 150 years ago in the spring of 1866, it was appropriate for us to visit memorial sites this year.

Our first stop was Leverington Cemetery in Roxborough, where we visited the grave of Civil War nurse Hetty (Harriet) Jones.  After one of Hetty’s brothers was killed in action fighting with the 55th PA Volunteers, she first served at a military hospital on Filbert Street.  When that site was converted into a soldiers’ home in late 1863, she departed for the front, where she served at City Point Hospital located strategically 15 miles from Petersburg, VA.  Hetty was not a young woman, and she worked herself to the point of fatal exhaustion — she died in her field tent.  Thus carved onto her gravestone is the image of a tent with an open flap: either Hetty is symbolically welcoming us to enter, or she is ready to emerge to resume her faithful duties.  To honor her service and sacrifice, G.A.R. Post 12, which was based in Roxborough, adopted her name and became the Hetty Jones Post.

In addition to Hetty Jones, Leverington is the final resting place for many other casualties of the Civil War.  To honor them, a Civil War monument with a statue of a Union infantry soldier was erected there in 1871, and General Meade spoke at the dedication service.  The statue has been stolen twice in the years since, the last time being about 20 years ago.  Fortunately, it was recovered and rededicated in a ceremony sponsored by the Roxborough Historical Society.

Our next stop was Market Square in Germantown, the site of the impressive G.A.R. Ellis Post 6 Civil War monument, which is surrounded by mortars from the siege of Petersburg and a cannon from the War of 1812.  The monument is across Germantown Avenue from the Deshler-Morris House, the summer home of President George Washington and his family for several seasons in the early 1790s when Philadelphia was the first capital of the United States.

After a brief rest stop at a McDonalds, we were off to the Philadelphia National Cemetery where rest the remains of thousands of American servicemen, including Galusha Pennypacker, who became a brigadier general at age 19 and full general at 21, the youngest general in the history of the American army.  (Pennypacker, a Medal of Honor recipient, would go on to serve in many capacities, including governor of Pennsylvania.) After the Philadelphia National Cemetery was established in 1884, the remains of many soldiers who had been first buried at various other cemeteries around the city were reinterred here, including the remains of U.S. Colored Troops who had died while in training at nearby Camp William Penn between 1863 and 1865.  Likewise the Philadelphia National Cemetery became the final resting place for 184 Confederate soldiers and sailors who had been evacuated to Philadelphia hospitals and died here of their wounds or illnesses.   A monument to these fallen sons of the South was erected in 1911.

Also notable at the Philadelphia National Cemetery was the Scott Legion Monument, which honors 38 soldiers who had served in the War with Mexico under General Winfield Scott.  Originally buried at Glenwood Cemetery, these men were reinterred here in 1927.

We then rolled through sections of North Philadelphia and Kensington to see in passing several  squares (pocket parks) that had been established to honor local Civil War heroes: one square was dedicated to homefront heroine Anna M. Ross, who was a mainstay of the Cooper Volunteer Refreshment Saloon until her death from overwork in December 1863, and after whom the G.A.R. Post 94 had been named; another was Birney Square, named after General David Birney, who died of disease in October 1864 and for whom Post 63 was named.

We got off the bus at McPherson Square to view a monument to Charles Allen Smith, one of two young Philadelphian serving in the U.S. Navy who were killed in action during an incident off the coast of Vera Cruz in the spring of 1914 during the Mexican Revolution.  In a spate of pre-World War I patriotism, various groups formed the Allied Monument Commission of Philadelphia to honor Smith’s sacrifice.  Also noteworthy at McPherson Square is the Carnegie library branch that occupies the top of the hill there.

Noon had come and gone, and we more than ready to quaff our thirst over a hearty lunch at McGillins Old Ale House on Drury Street in downtown Philadelphia.  A generous buffet lunch awaited us in private dining space reserved for us on the second floor.  As we enjoyed our repast, current owner Chris Mullens gave us an overview of McGillins’ proud 156-year-history, dating back to 1860.

After lunch our Hagey driver Dave Leslie picked us up on busy 13th Street (not an easy accomplishment), and we were off to drive by the Korean and the Vietnam War Memorial near Penn’s Landing.  Across Columbus Boulevard we could see the Olympia, which we learned had been the ship that first transported the remains of three unidentified American World War I “dough boys” to Philadelphia, where a little girl picked one of them to be buried in the Tomb of the Unknown Soldier at Arlington National Cemetery.

Driver Dave was able to drop us off on Lombard Street near 6th for our next stop, a visit to historic Mother Bethel Church.  After a brief introduction to the history of the church by one of its deacons, most of the group went up to the balcony to get a closer look at a magnificent stained glass window that centers around a rendering of the G.A.R. emblem with its five-pointed star.  This window was presented to the Church by the G.A.R. in 1890.

After a brief stop at Reynolds Square in South Philadelphia, where we posed for group pictures, we drove past the Union League, City Hall, and the Azalea Gardens behind the Philadelphia Museum of Art where the walkway is lined with statues of heroes of the American Revolution.  We then headed to West Fairmount Park to drive by the Smith Memorial and, of course, the highlight of the day, the Meade equestrian statue behind Memorial Hall.  This magnificent sculpture, which was cast from melted down Confederate cannons and rests upon granite from Devil’s Den, magnificently portrays Meade on Old Baldy at a critical moment at around 6 pm on July 2, 1863 at Gettysburg, when Confederate troops were threatening to break through a hole in the Union line.  Meade was prepared to lead his small entourage in a suicidal charge that could gain a few minutes time for Federal reinforcements to arrive.  Fortunately, reinforcements did arrive seconds before Meade could give the command, and the General would live to lead the Army of the Potomac in defeating of Robert E. Lee and the Army of Northern Virginia the following day.

The sun was starting to dip, as were the energy levels of many of us, so after a brief stop at Westminster Cemetery near West Laurel Hill, we were ready to return to Laurel Hill Cemetery, where Betty and Jerry McCormick welcomed us with libations and snacks.

Kudos to Andy Waskie for leading us on another highly informative adventure, to the McCormicks for all their work in organizing the trip and our refreshments, to our driver Dave who performed some near miracles in navigating the bus in and out of narrow city streets, to our friends at Laurel Hill Cemetery, and to all the cheerful members and friends of the Meade Society who enjoyed and contributed to the camaraderie of the 2016 spring trip.

Photos from the annual Meade Society Spring Trip to veterans’ sites in and around Philadelphia: